Inspired by Vincent Van Gogh’s famous painting, The Starry Night, and the writing of H.P. Lovecraft.

In the aftermath of the breakdown that resulted in the self-mutilation of his left ear, Van Gogh voluntarily admitted himself to the Saint-Paul-de-Mausole, a lunatic asylum, on 8 May 1889.

During the year Van Gogh stayed at the asylum, the heavy output of paintings he had begun in Arles continued. During this period, he produced some of the best-known works of his career. The Starry Night was painted between 16 and 18 June 1889.

We know, thanks to H.P. Lovecraft’s The Call of Cthulhu, that certain unearthly dreams afflict artists, who are particularily sensitive to psychic disruptions. Now perhaps we understand what may have caused the breakdown which caused Van Gogh to seek help at the asylum.
This design is part of a series that is currently on display in an exhibition called Starry Night, Scary Night, at the Arkham Museum of Art, at Miskatonic University, Arkham, MA. 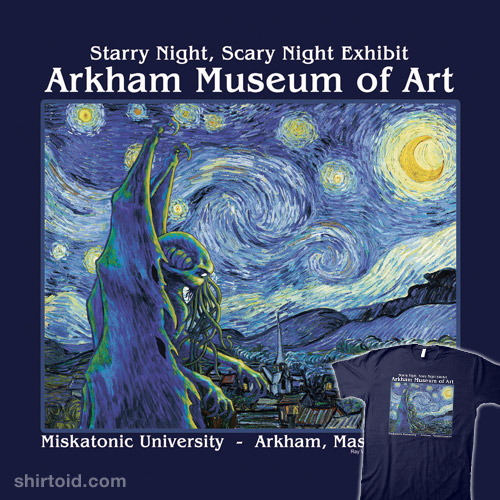